COMBUSTUS :      “Alvari Lume's’s music is an emotional stream in constant evolution,” says Italian composer,Emiliano Pietrini, who records under the name, Globoscuro, “Alvari’s radical improvisation is like an illumination. Images and sensations evolving according to the rhythm that explodes from the heart of the performer. A perpetual motion of inspiration. What you hear is a kind of struggle: The thoughts expressed by each instrument fighting among themselves. But it is a harmonic struggle harmonic. A quiet chaos…a shiny madness.”

'ever since guitar was developed', he says,
'there has been a strong heritage of playing solo.
especially guitarist composers with their own music.
my music is free improvised
and i feel that this heritage is important
to keep alive with ones own musical language'.
listen some of the music that Alvari Lume is involved from
alvari lume's myspace
4spiral at myspace
connect with Alvari Lume in facebook to share thoughts and
hear about news and activities. 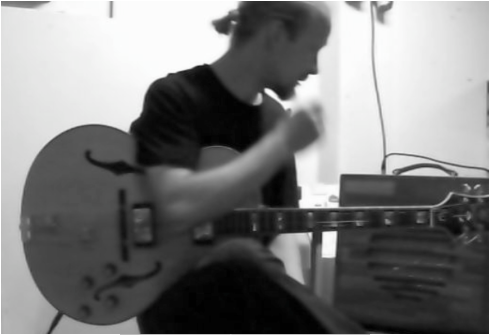 music of alvari lume grows from the heritage of jazz in it's all forms, being free and from the huge interest of barogue music and classical avant garde and contemporary music. music itself should be a document of the moment.no matter what happens, all is important. music is not a competition. it is expression..